The darkest part of the advertising industry is “personal information”. Boost the attractiveness of ads through blockchain

It has become common sense to develop marketing strategies based on data analysis, so it goes without say that advertising will use big data. Although companies are able to manage more user data, users can barely manage their own data. Information is of great value in today’s society. On the one hand, users aren’t able to manage their personal information; on the other hand, this personal information is used by others. This mechanism can result in a huge loss for users.
Noiz, a company based in Hong Kong, has introduced blockchain technology for data collection and designed a mechanism that allows users to own their information. Focusing on the advertising industry, which possesses a large amount of user data, blockchain can be used to ensure sound industry development. Mr. Connor Doyle, Noiz’s marketing engineer, had a discussion with Mr. Osaka, Editor-in-Chief of the AIre VOICE, about what would happen when the blockchain is introduced to the advertising industry and what are the ways for users to manage their personal information.

Improving the image of advertising with transparency
Connor Doyle: I specialize in marketing and technology and I am currently working on data collection. From a global perspective, China is a country where frauds and crimes happen quite commonly in data processing, so China hopes to use AI and blockchain to ensure data collection transparency and improve the way data is collected. In addition, I want to convey my data value to consumers. 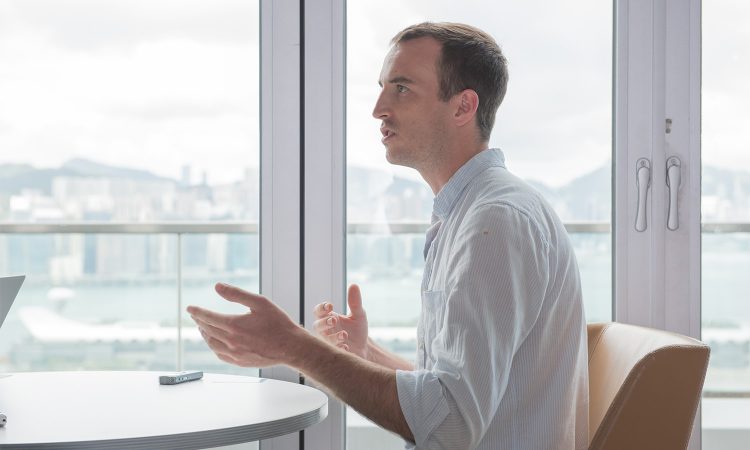 Osaka: How is blockchain being used as of now?

Osaka: It’s said that a token will also be issued. What kind of token is it?

Connor Doyle: A community-based token. Tokens are obtained by watching advertisements. For example, in a chat room, you are asked “What color do you like?” If you answer the question, you’ll get a token. Another advantage is that interactive advertising can be used to confirm whether the user is a real person or not.

Osaka: Is the focus on advertising? I think advertising goes well with blockchain. If tamper-proof accurate data has been collected, the data can be used to respond to client requests based on evidence and logic.

Connor Doyle: The downside of the advertising industry is that unreasonable suggestions are also proposed repeatedly, this is also an issue that could get resolved.

Osaka: However, if data is collected based on blockchain, the amount of data will be huge. For example, if you are asked to submit all impressions, will it be a tremendous amount of work? Will it cause issues with an huge increase in the amount of work increases?

Connor Doyle: Processing difficulty increases as the volume of data increases. However, this may boost the business speed. If the data is used for marketing, advertising will correspond to what the users click. This could be consider as efficient advertising.

Connor Doyle: What we really want to do is give data ownership back to the user. The current situation is that user data is used by companies without permission.

Connor Doyle: The mechanism we want to realize is not like this. Instead, it should be a mechanism that allows users to own the data, and companies can only use the data after being authorized by the user. Such a mechanism can be realized if transparency can be achieved through blockchain.

If it is global development, then GDPR shall be followed.

Osaka: A new GDPR issue (the EU’s General Data Protection Regulation) has emerged and personal data protection has been strengthened. What is Hong Kong’s attitude towards GDPR? I think GDPR has a great influence on the advertising industry.

Connor Doyle: As GDPR is a regulation within the EU, Hong Kong does not have to comply. However, GDPR must be considered when you want to be a global brand and expand globally. The Harmony mechanism is a blockchain. It allows personal information and required information to be used separately. I think this can be adapted to GDPR.

Osaka: Tokens will be offered when ads have been displayed and actions have been taken. Does this incentive design also comply with GDPR?

Connor Doyle: Because users have consented, I think it should be adapted to GDPR. We plan to automatically sort the data based on the type and content and determine if it can be provided to the company. From the corporate perspective, the company will ask “why can’t we use the data we’ve paid for?” However, according to GDPR, users always have the right to delete their personal information, so we must make cautious decisions.

Osaka: It is said that this mechanism is set up to exercise rights.

Connor Doyle: I would like to establish a future mechanism for the advertising audience to sign a contract with Noiz which provides data to advertisers based on the contract. Whether the data will be deleted or not is still under discussion. However, we are considering a mechanism that restricts access while retaining the data.

Osaka: How do you restrict access to user data?

Connor Doyle: The mechanism being considered is that when a company accesses data on a blockchain, the user will then receive a notice to confirm whether the data can be used or not.

Osaka: If the users receive a lot of notifications, they won’t be able to check all of them, so the volume of notifications must be controlled. What do you think of this?

Connor Doyle: Users might be able to use an app to confirm the records instead of notifications. Users can confirm which data has been viewed and used.

Blockchain can light up the dark areas of the industry

Osaka: Facebook has announced that it would offer a digital currency -“Libra”- in 2020.

Connor Doyle: We obtain data by ourselves. However, Facebook already holds data and uses the data for development. These are different structures. I think the involvement of big players like Facebook has a positive impact on the blockchain industry.

Osaka: Although a big company entering the competition could be seen as a threat, people in the blockchain industry generally hold a positive view about Facebook’s participation. The participation of big companies will improve general recognition, facilitating the industry development.

Connor Doyle: Industries that are not transparent about data and money, such as the advertising and medical industries, can also achieve sound development by using blockchain.

Connor Doyle: In today’s information society, data has great asset value like oil and gold. The advertising industry relies heavily on data, so how to protect and use data securely in the future will be of concern for many people. If the blockchain industry is committed to this work, wouldn’t it be able to achieve a meaningful result and contribute to society?

AIre VOICE publishes the latest news on blockchain and features interviews as well as columns for people with various backgrounds. Please have a read.